Rep. Issa to Newsmax: California, a ‘Safe’ and ‘Legal’ Place to be Homeless 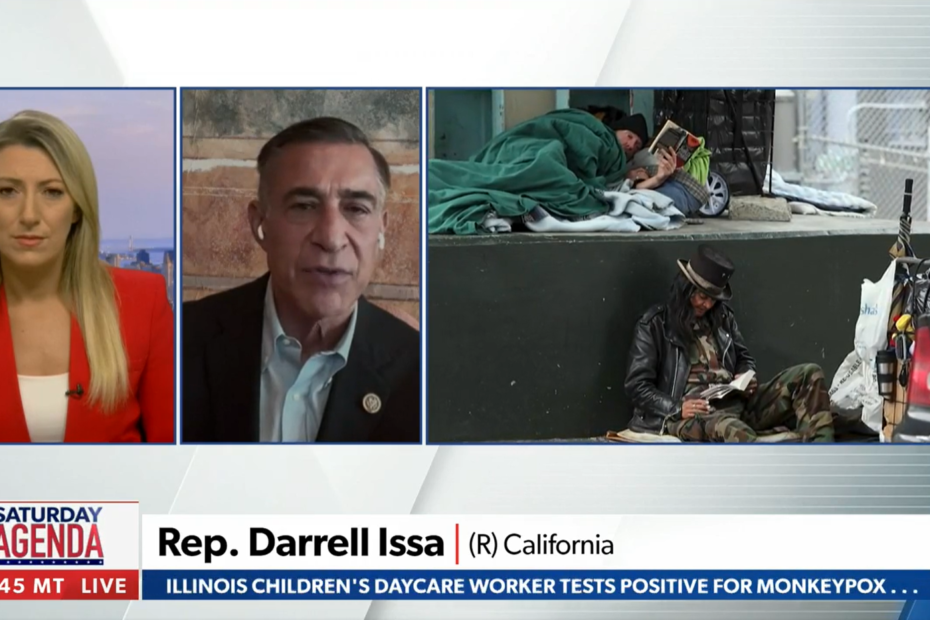 Rep. Darrell Issa, R-Calif., noted in his Saturday interview with Newsmax that his state has made it “legal” and “safe” to be homeless.

Speaking with “Saturday Agenda,” Issa says, “California has quit trying people for petty crime. So if you’re living on the street, stealing for a living, or even just grabbing people’s products from their backyards to add to your home — your quote home — California makes it impossible … [for] law enforcement to get any kind of prosecution, so this is a safe place to be homeless; this is a legal place to be homeless; and this is a place where you can pick the nicest backyard to camp in.”

“And oh, by the way,” the congressman continued, “you can take their barbecue grill to make your dinner in their backyard, and you won’t be prosecuted. And you know if you do that, you’re going to get more homelessness, and oh, by the way, if you don’t deal with the drug problem, you’re going to get people who are perpetually homeless since more than 75% of all homeless are under current addiction.”

According to the East Bay Times, in an effort to clear open drug use on California streets, California’s state legislature passed Senate Bill 57. The measure, which now heads to the state’s Gov. Gavin Newsom’s desk, would “allow the two Bay Area cities and Los Angeles to open the experimental facilities where users can consume illicit drugs supervised by people trained to reverse an overdose. Users would bring their own drugs but would be provided with clean supplies, such as needles.”