Local veteran could get Congressional Medal of Honor 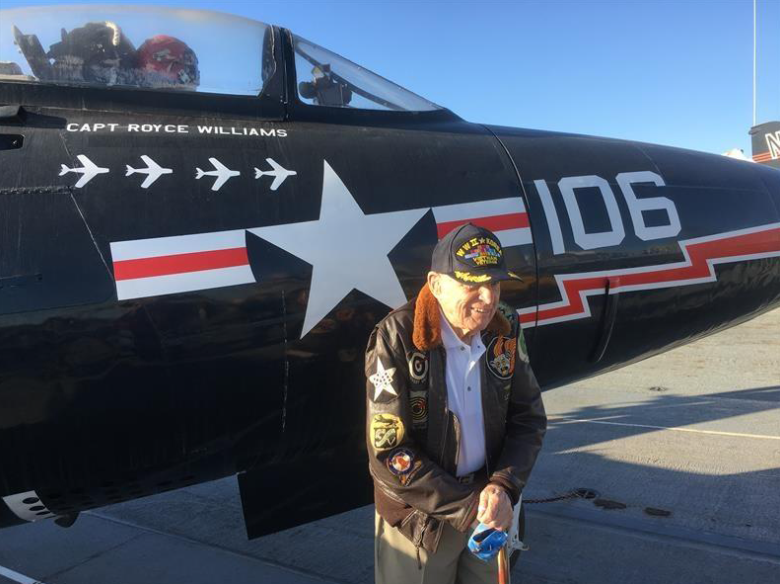 Royce Williams, a Navy flyer, survived probably the longest dogfight in military history on November 18, 1952, 35 minutes, and defeated seven MiG 15 fighters over Korea. Williams could get the Congressional Medal of Honor that he never received because the battle itself was classified for decades. Amazingly, although his Navy Grumman F9F-5 Panther jet was as riddled with holes as a spaghetti strainer from hundreds of bullets, he himself was able to land uninjured on his aircraft carrier, the USS Oriskany.

Williams is a longtime resident of Hidden Meadows. Today he is 97.

Royce’s congressman, Darrell Issa, along with San Diego’s congressional delegation, successfully pressed for Royce to be recognized for his amazing battle. On July 14 the amendment on behalf of Royce Williams to be recognized with the Congressional Medal of Honor was overwhelmingly approved by the House and added to the upcoming National Defense Authorization Act (NDAA). However, it requires action from both houses of Congress.

The newspaper spoke with Congressman Issa on Monday, August 1 and he said the amendment is now with the U.S. Senate, which Issa has been lobbying. “I can’t guarantee what may happen in the Senate, but I can’t imagine why it wouldn’t be approved,” said Issa, who called Royce: “A true Top Gun. If he gets awarded the medal, I hope that Tom Cruise shows up for the ceremony.”

Issa noted that one reason why it became feasible to give Royce the medal was that the true circumstances of the battle were confirmed when Soviet archives were opened at the end of the Cold War. Including the number of Soviet-era MiGs that were shot down over the Sea of Japan, What was even more amazing, said Issa, was that at the time Williams was flying a plane that wasn’t considered one of the top-of-the-line fighters of the Navy. And yet he was able to shoot down possibly four fighters. Which would have put him in the lofty realm of a fighter ace from one engagement.

The battle is considered the longest dogfight in aviation history. The next longest is five minutes.

In his speech on the floor of the House of Representatives, Issa declared, “On that unforgettable day in 1952, Capt. Williams alone faced seven Soviet MiG-15s – impossible odds by any conventional measure. Royce shot down four. He also survived a 37-millimeter round to his fuselage, where six inches to the right or left would have meant certain death. Despite the immense damage to his jet, he made a near-perfect landing on the deck of his aircraft carrier. This was an act of indomitable courage and the demonstration of the highest skill under incalculable duress.”

At the time Williams was ordered to keep his mouth shut about the battle in order not to raise the level of tensions between the U.S. and the Soviet Union.  It was only after the end of the Cold War that the entire story was confirmed.

Williams’s Navy career began in 1943 during World War II. During his 37-year naval career he flew many types of aircraft. During the engagement of November 18, 1952, Royce and three other F9F Panthers were launched from the deck of the Oriskany to intercept seven MiG fighters flying from Vladivostok, Russia.