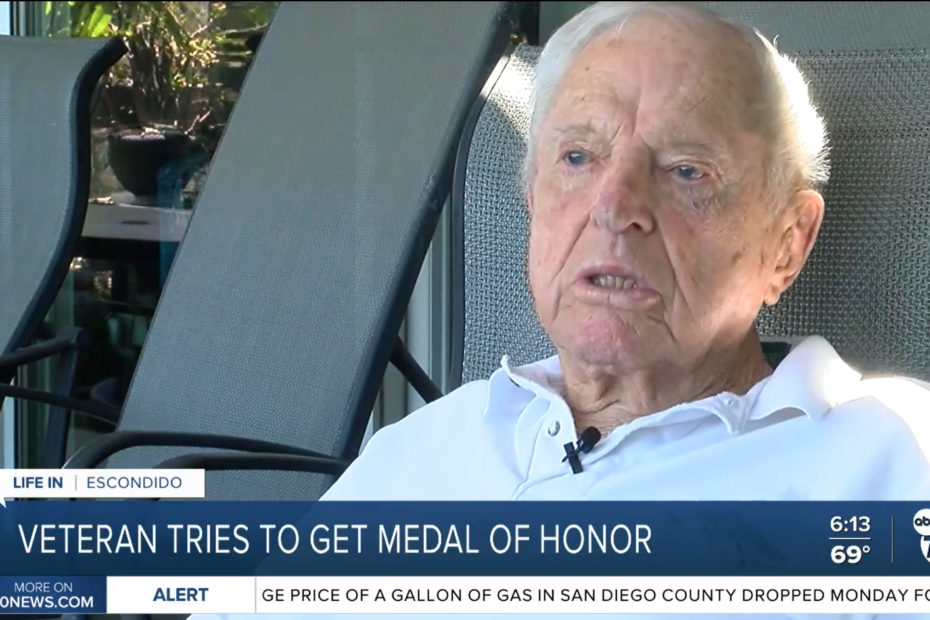 One man did the unthinkable 70 years ago. And now, those closest to him, and Congressional leaders, are trying to give this Escondido veteran a Medal of Honor.

“About age 7 or so for me, I started getting visions of me being a pilot,” says Royce Williams.

The 97-year-old remembers his life clearly.

At 16 years old, he joined the army. At 17, he began his career in aviation training towards the end of World War II and stayed in the Navy at the beginning of the Korean War.

“That was a little over an hour and a half out of 37 years in the military,” says Williams of the unbelievable event. “So it was a brief incident but it seems to have been significant.”

Williams recalls a mission near the border of the Soviet Union and North Korea. He was with three other Panther pilots who he had never flown with before.

“While on our way up above the clouds we got a call from the Combat Information Center,” explains Williams. “That [they] had radar information of inbound, unknown aircraft, we call them Bogies.”

Williams identified the seven planes as Soviet MiG-15s. The captain of his fleet had an engine problem, so the captain and his wingman flew to safety.

Williams and his wingman were ordered to head back to the fleet, but they found themselves stuck.

“Well in that turn, here come four of them at my 10 o clock position, all firing,” with a smile and a laugh, Williams furthers, “They started it.”

But Williams was ready.

His wingman escaped safely and Williams was left alone.

He shot bursts of shots whenever he could, maneuvering and strategizing against the Soviet planes.

“When they find out about seven on one, they go that’s incomprehensible,” says Lewandowski.

He further explains other people’s reaction to Williams’ feat, “Why was he even there? What kind of special human being has it in his own fortitude to be like they are not getting by me, and then backs it up. It’s just incredible.”

The dogfight was about 35 minutes and is considered by many aviation experts as the longest aerial battle with a single plane.

After running out of ammunition, Williams headed back to his ship, unscathed. His jet had 263 holes in it.

Only one of the seven original Soviet planes returned to their base.

Williams reflects on his heroic actions, “I was just busy doing what I had to do if they stuck around and fought.”

But the incredible feat was never on record, and Williams was sworn to secrecy.

“He said, you know what,” recalls Williams of what his Admiral at the time told him. “We are going to tell you you can’t tell anyone ever. And ever lasted for me for about 50 years or so.”

Through the remainder of Williams 37-year career, he received many awards, but not the one he wanted, and deserved most of all: A Medal of Honor.

“It kind of means the world to me,” explains Williams. “If I had gotten it early, it would have really changed my life.”

In the 1990s, those classified records became open through Soviet records. Roughly 10 years ago, Admiral ‘Don’ Shelton researched and tried to garner signatures so the Navy and Department of Defense would grant Williams the honor.

But it failed, twice.

However, Williams and his friends are not giving up.

“I was engaged because I believe it was put on my plate for a reason,” shares Lewandowski.

Lewandowski met Williams through the American Legion. He says now, things are different, as they have the support of all five members of the San Diego Congressional Delegation.

“Once you see his story of what Royce Williams did and how deserving he is of this high medal you realize it’s time,” shares Congressman Darrell Issa.

Steve hopes that they can get this approved through Congressional Action before September 30th.

“This is like Shakespeare said, ‘Once more unto the breach,'” shares Lewandowski. “And this is our last best chance.”