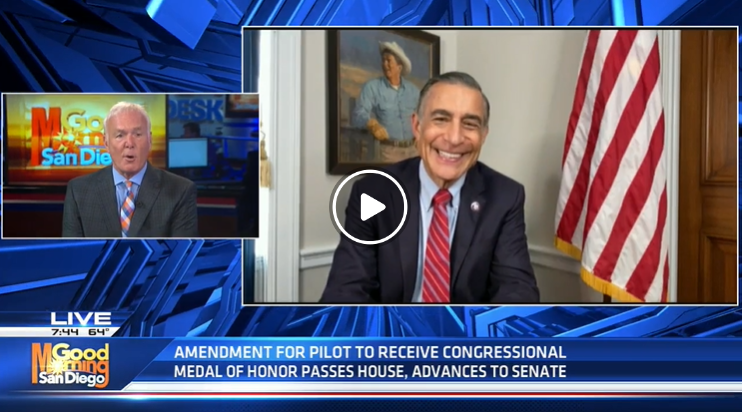 SAN DIEGO (KUSI) – Congressman Darrell Issa (CA-50) issued the following statement after his amendment on behalf of Royce Williams to be recognized with the Congressional Medal of Honor was overwhelmingly approved by the House and added to the upcoming National Defense Authorization Act (NDAA).

“My floor speech today advocating for Royce Williams — an American hero and a Top Gun pilot like no other – only allowed for two minutes. It was not nearly enough time to describe the heroism and valor he demonstrated for 30 harrowing minutes 70 years ago in the skies over the North Pacific and coast of North Korea. It is to this day the most unique U.S.-Soviet aerial combat dogfight in the history of the Cold War – and one that is truly for the ages.

“On that unforgettable day in 1952, Capt. Williams alone faced seven Soviet MiG-15s – impossible odds by any conventional measure. Royce shot down four. He also survived a 37-millimeter round to his fuselage, where six inches to the right or left would have meant certain death. Despite the immense damage to his jet, he made a near-perfect landing on the deck of his aircraft carrier. This was an act of indomitable courage and the demonstration of the highest skill under incalculable duress.

“We won’t stop until Royce Williams receives the recognition he doesn’t seek, but richly deserves. It is long past time for the Congress to have a real say on who receives the Congressional Medal of Honor.”