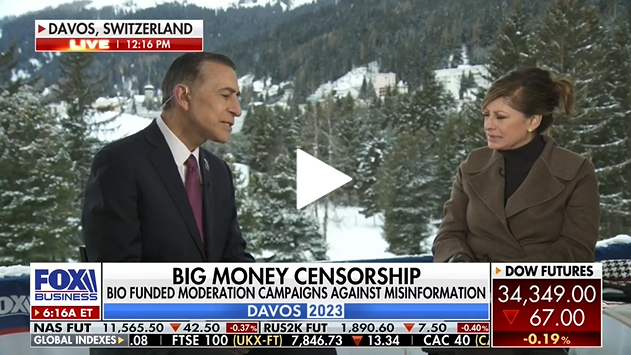 On Tuesday’s broadcast of the Fox Business Network’s “Mornings with Maria,” Rep. Darrell Issa (R-CA) reacted to the latest batch of Twitter files showing that pharmaceutical companies pressured Twitter to take down tweets pushing for a generic vaccine by stating that it shows Twitter hasn’t just worked with the government on political matters, but even worked with businesses on suppressing content and pointed out that weaponizing the federal government has been used against civil rights activists in the past.

Issa said, [relevant remarks begin around 2:10] “The fact that we should have to distort free speech in order to get people to take experimental vaccines is bad enough. But it’s just part of a pattern. And if not for Elon Musk, we wouldn’t know that Twitter and other social media have had a pattern of working, not just with business of this sort, but with government in order to twist things that even might affect elections.”

He added, “Well, not since they spied on Martin Luther King trying to get the dirt on him — and yesterday was a good day to remember that — have we seen the weaponization against perceived enemies of the government. In this case, the enemies being the other party.”