Issa: ‘There Was Clearly a Conspiracy’ to Cover Up Hunter Biden Laptop Scandal 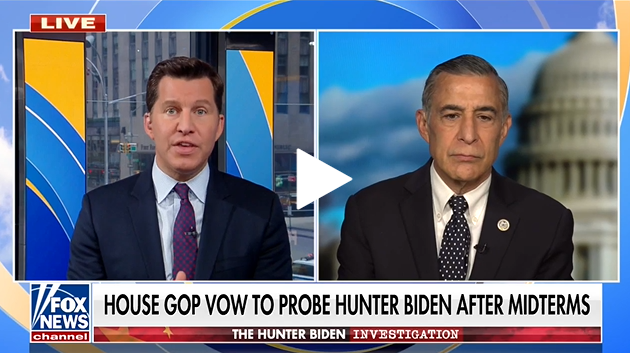 Issa asserted that “there was clearly a conspiracy” to cover up the Biden family’s financial dealings and suggested there was “this kind of coordinated effort just before an election” to affect the election.

“[B]ecause this involves so many companies such as Facebook, Twitter and so on, they took down the New York Post, there was clearly a conspiracy to, if you will, cover up the wrong-doing of the president and his family just before an election that he had to win and did win. So, the investigation is clearly warranted, not just because Hunter Biden seems to be a petty criminal taking advantage of his father’s money and perhaps sharing money with his father — it’s because if we have this kind of coordinated effort just before an election, what we have is American collusion to affect the output of an election. That can’t happen.”

He continued, “We’ve got to make sure that our press is free and fair. And right now, when it comes to new media, free and fair doesn’t exist. And when it comes to one of the oldest newspapers in America, the New York Post was founded in 1801, they were suppressed, and that’s something that every American should be concerned about. And the Judiciary Committee and other committees of Congress are going to have to investigate it thoroughly.”