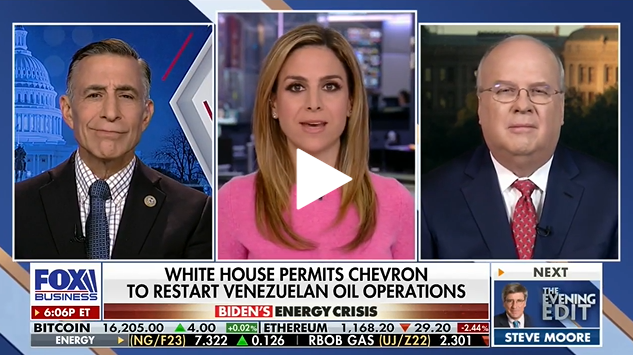 On Monday’s broadcast of the Fox Business Network’s “Evening Edit,” Rep. Darrell Issa (R-CA) reacted to the Biden administration easing some sanctions on Venezuelan oil production by pointing out that the United States is lifting sanctions without any meaningful actions by the Venezuelan government and also questioned why the Biden administration is so intent on trying to reduce carbon emissions in the United States while asking for the rest of the world to increase theirs.

Issa said, “Ultimately, we normally lift sanctions in return for an action, not lifting sanctions in return for a vague promise that they might do something like a free and fair election six or eight or nine months into their exporting oil, getting the money from it that allows this dictatorship to continue to operate. But I think the more important point is, why not in the U.S.? Is it really that important for the President to stick to a promise of reducing our carbon production while, in fact, begging the rest of the world to increase theirs? Nothing makes less sense than that.”

He added, “There’s no question at all, the President wants to have it both ways. He wants to take credit for stopping the production of oil and natural gas, and then he wants to say, but look what I’ve done.”