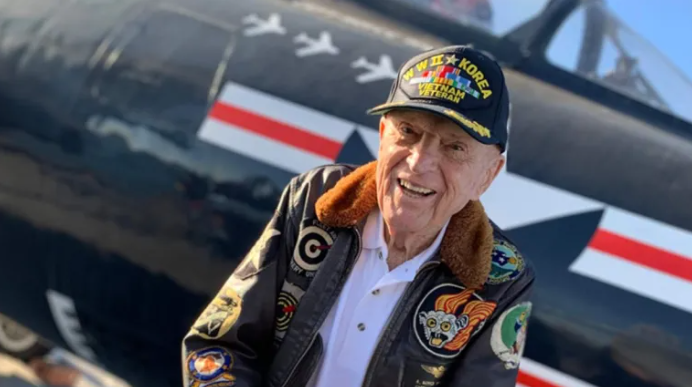 Rep. Darrell Issa said Friday a U.S. Naval aviator from Escondido who survived — and prevailed — in perhaps the longest aerial dogfight between a lone American fighter pilot and enemy combatants in history will receive the Navy’s highest award for valor.

E. Royce Williams, 97, of Escondido, has been the subject of a campaign by Issa and others seeking to ensure his feats are fully recognized and honored.

Issa had sought a Medal of Honor for Williams in legislation considered by Congress last year, but the nomination did not gain sufficient traction. Instead, U.S. Secretary of the Navy Carlos Del Toro has signed off on awarding the Navy Cross to the former fighter pilot, according to the congressman.

A formal ceremony is scheduled for Jan. 20 in San Diego, but it was not immediately clear whether it would be a private or public affair.

“Williams is … a Top Gun pilot like no other, and an American hero for all time,” Issa said. “The heroism and valor he demonstrated for 35 harrowing minutes, 70 years ago in the skies over the North Pacific and the coast of North Korea saved the lives of his fellow pilots, shipmates and crew. His story is one for the ages, but is now being fully told.”

Williams, who retired from the Navy as a captain in the mid 1970s, was on combat air patrol in a single-seat F9F Panther jet fighter, flying with three other squadron mates deployed from a carrier anchored in the Sea of Japan, on Nov. 18, 1952, when the Americans encountered seven Soviet MiG-15s at higher altitude along the Yalu River.

According to accounts of the mission retold in books and other media, the men were ordered by their commander to retreat to the carrier and establish a protective screen. Three of the pilots succeeded, but Williams soon discovered he had been boxed in by the Soviet fighters.

The young lieutenant was forced to engage the MiGs as they swarmed him, culminating in a half-hour of twisting, turning and other gut-wrenching maneuvers to avoid being shot down and position the Panther to fire back at the Russian pilots trying to kill him.

“I was engaged mentally at the time,” Williams told the San Diego Union-Tribune last year. “A lot of it was awareness of where they were and how I had to maneuver to avoid them. They were taking turns. I decided if I concentrated on shooting them down, then I’d become an easy target. So my initial goal was to look for defensive opportunities when they made mistakes.”

He blasted four out of the sky and likely scored hits on two others, whose pilots never returned to their base in Vladivostok, according to the book “Red Devils Over the Yalu.”

Williams said that he ran out of ammunition and made a bee line for his ship, evading the seventh MiG pilot by diving in and out of clouds for cover. He landed uneventfully, but later counted more than 250 machine gun holes in his F9F.

“He also survived a 37-millimeter round to his fuselage, where six inches to the right or left would have meant certain death,” Issa said. “This was an act of indomitable courage and the demonstration of the highest skill under incalculable duress.”

Williams was told to clam up about the dogfight for fear of causing negative publicity for the Russians, who weren’t officially involved in the Korean War. According to one account, President Dwight Eisenhower personally directed that the incident remain under wraps. It was not officially acknowledged until the fall of the Iron Curtain and the ensuing release of Soviet archives in the 1990s, which detailed the air battle.

“It is, to this day, the most unique U.S.-Soviet aerial combat dogfight in the history of the Cold War,” Issa said. “It is my honor to have fought for Royce to gain a recognition that he has not sought, but so richly deserves.”