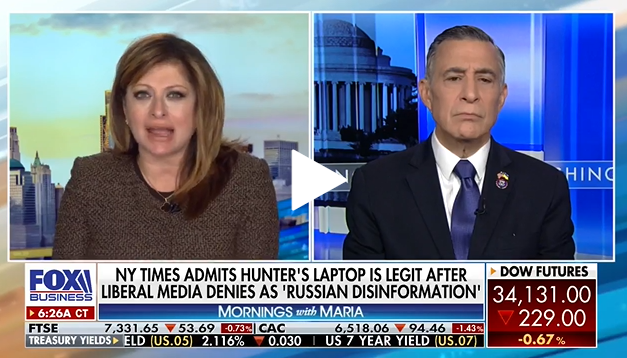 Friday on Fox Business Network’s “Mornings with Maria,” Rep. Darrell Issa (R-CA) reacted to the New York Times reversing and admitting that Hunter Biden’s laptop was legitimate after initial reporting on the laptop was suppressed by tech giants like Twitter and Facebook.

Issa explained his call for a congressional investigation into big tech and corporate media’s collusion concerning the blackout of reports on the younger Biden’s laptop. He emphasized the need to make “sure it doesn’t happen again.”

“[I]f you look at the investigations historically, any time that there is likely to be a conspiracy that could lead to the changing of the outcome of an election, it must be investigated,” Issa outlined. “Certainly, you saw, we all saw, three-plus years of the Trump administration having to deal with the so-called Russian collusion. At the end of it all, completely debunked, but nobody saw it as you can’t do it on the other side of the aisle.”

He continued, “Now, we have something where very clearly just weeks before the election something that had been hidden from us made us aware that this president is involved with a very corrupt individual who happens to be his son who he flew on Air Force 2, who he helped, and evidence that the two worked together and cooperate on these financial … investments that have been so lucrative to Hunter Biden. And now we’re being told, well, you know, it’s real but too bad. Well, no. … The outcome of the election is known, but how about making sure it doesn’t happen again, that Twitter doesn’t literally take down a major news outlet simply because they determine it’s inconvenient truth.”

Issa lamented that “free speech is being impeded.”

“There are multiple proposals right now — Congressman Ken Buck, Congressman Jim Jordan and others — to deal with the fact that free speech is being impeded,” he advised. “Now, if it’s being impeded by conspiracy, that’s a separate question, and that’s what we’re calling for the investigation on, but when we look at the infringement of free speech that these near-monopolies like Twitter and Facebook are doing, we have to ask the question of what changes in what is called Section 230 would allow us to basically say, look, if you err on the side of free speech, we want you to have some immunity from being sued because somebody doesn’t like what was said. If, on the other hand, you take down somebody’s free speech rights, you take away that, they should be able to and are not currently able to sue you for that.”