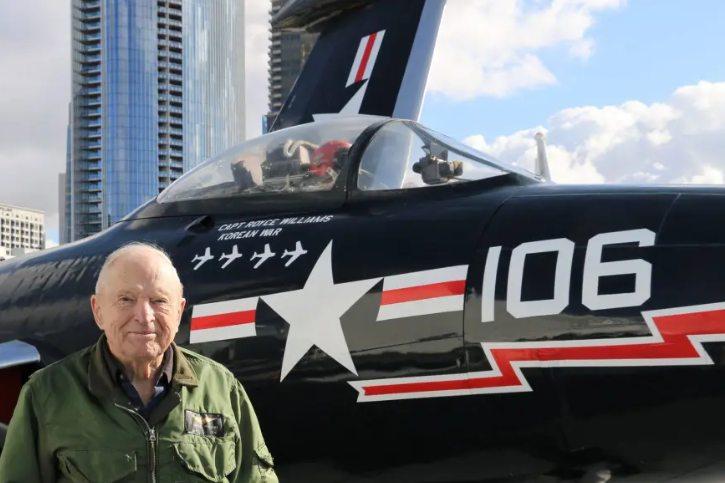 Williams, 97, who retired in 1975, on Friday received the Navy Cross, the service’s second-highest award for military honor.

The award came after decades of Williams abiding by a promise to keep his mouth shut—even among friends and family—about this brief yet striking moment of aerial combat, the San Diego Union-Tribune reported in 2022.

Tom Cruise, who played the fictional Maverick in the “Top Gun” series, congratulated the American hero for his award.

“Your grit and bravery are simply astounding,” he said in a video recording. “You are a true American hero and I offer you my most sincere thanks and congratulations to you, sir.”

On Nov. 18, 1952, Williams was conducting combat air patrol in a F9F Panther with three other US fighter pilots along the Yalu River, over the northernmost part of Korean Peninsula that separates North Korea from China, and near what was then the Soviet Union.

The leader of their patrol suffered mechanical problems and left with his wingman back to a U.S. aircraft carrier in the Sea of Japan. Then Williams and his wingman noticed seven Soviet MiG-15s heading toward the Americans.

“They just didn’t come out of Russia and engage us in any way before,” Williams told the American Veterans Center.

After the pair were ordered to get between the Soviet forces and the U.S. aircraft carriers, four of the MiGs began shooting at the pair, leading Williams to return fire.

Despite being told to stand down, for the next half-hour, Williams outmaneuvered the Soviet fighter jets. He unloaded all 760 rounds of the 20mm shells his plane carried, and took 263 holes to his own jet, but managed to return to the aircraft carrier uninjured.

Williams only began sharing the story in 2002, after Korean War records were declassified, The Independent reported. The Soviet Union was not an official combatant in the Korean War.

Rep. Darrell Issa, who campaigned to have Williams’ achievements officially recognized, called him “an American hero and a Top Gun pilot like no other,” CBS-8 previously reported.

He added that there were few others who could compare to the “the heroism and valor he demonstrated for 30 harrowing minutes, 70 years ago, in the skies over the North Pacific and coast of North Korea.”