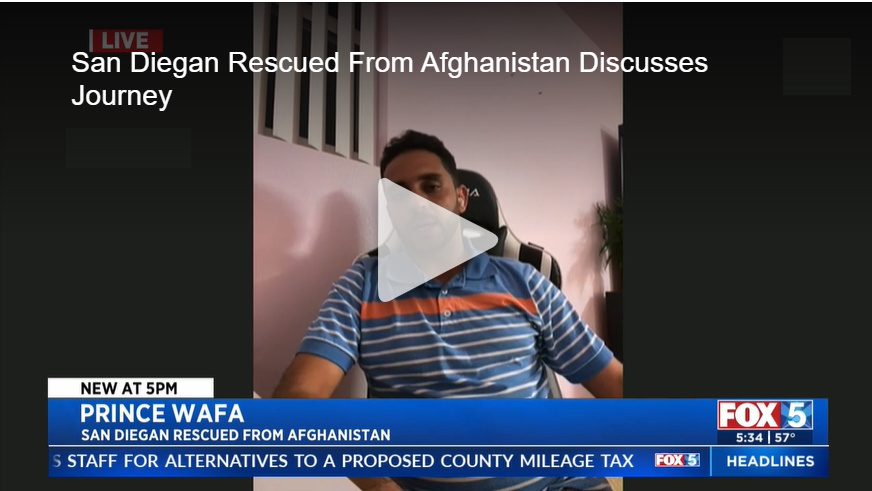 SAN DIEGO – A local business owner and his wife who were evacuated from Afghanistan this week have made a safe return to San Diego.

Prince Wafa is among dozens of people Rep. Darrell Issa, R-Bonsall, has worked to get out of Afghanistan since the United States withdrew from the country earlier this year. Issa called Wafa’s safe return to the U.S. “personal,” noting that he was “amazed by his courage and commitment.”

Both Issa and Wafa, who owns convenience stores in the San Diego area, joined FOX 5 Friday to discuss the journey and the challenges ahead for those remaining in Afghanistan.

“We’re just basically relaxing from what we have experienced in the last few months here,” Wafa said. “Seeing San Diego, I was really happy.”

Issa said Wafa’s story, which involved a tedious wait for his spouse’s visa paperwork to be processed, was the “nightmare before the nightmare of the bureaucracy of trying to legally get his spouse here.”

“He’s giving you blow by blow but he could go on for 30 more minutes and still wouldn’t finish the kind of craziness that somebody who plays by the rules deals with,” the congressman said. “The backlogs, the bureaucracy that say, ‘I don’t have enough people,’ even though you’ve done everything right.

“His wife was waiting on something simple: an interview. That interview was simply backlogged and they were going to get to it when they got to it and instead, they got on C-130s and left the country and left he and his wife behind.”

Officials for Issa’s office said they have helped evacuate more than 40 members of his congressional district from Afghanistan since the Taliban regained power. Now, he is urging the Biden administration to create a single point of contact to help evacuees rather than routing them through various agencies.

As for Wafa, he returned to his downtown San Diego 7-Eleven this week where he says he was met with a warm reception.